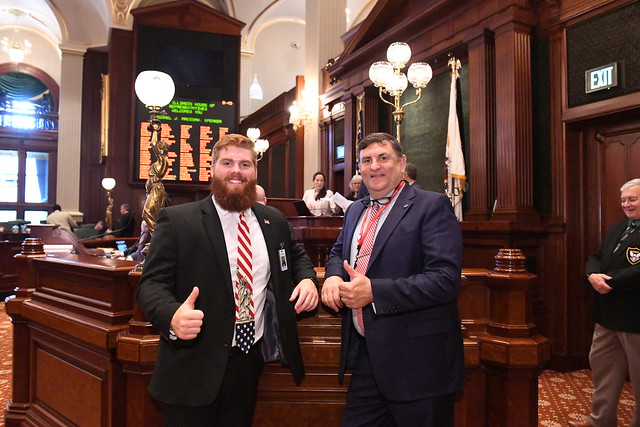 Springfield…State Representative Dave Severin hosted Sesser-Valier High School graduate and 2019 YMCA Youth and Government Student Governor at the State Capitol on Thursday. Thery served as Rep. Severin’s page for the day and Severin passed a congratulatory resolution in his honor. The full text of the resolution is below.

WHEREAS, The members of the Illinois House of Representatives wish to congratulate Matthew Eugene Thery of Sesser on being elected as Illinois’ 70th Youth Governor; and

WHEREAS, Matthew Thery is the first governor to be elected from Southern Illinois since 2005; he will receive a chance to act as governor for a day and visit Washington D.C. with his fellow Youth Governors from around the country; and

WHEREAS, Matthew Thery was welcomed home after his victory with a parade; during his campaign, he participated in debates, press conferences, and primaries before the final competition against three Chicago-area students; and

WHEREAS, Matthew Thery received nearly 1,200 votes from student delegates; he appreciates all that his Sesser-Valier classmates did for his campaign and has stated that “it hasn’t quite sunk in yet, because going into this, nobody expected forme to come out on top. This goes to show that hard work can get you places; and

WHEREAS, Matthew Thery is a junior at Sesser-Valier High School and has been involved in nearly every extra-curricular activity offered at his school; he also stays active in his community; and

WHEREAS, Matthew Thery is a multi-sport athlete with a passion for baseball; he enjoys riding motorcycles, lifting, and shooting guns; he is also involved with the football team, the track team, and the basketball team; he is active with the Future Farmers of America, the Outdoorsmen Club, the National Honor Society, and the Fellowship of Christian Athletes; he is
a member of the school band and the math team; he also takes part in the Scholar Bowl and is an active member of the student council; he shows his school spirit as a member of the Spirit Club; and

WHEREAS, Matthew Thery also works for Acosta Construction and gives back to his community by doing volunteer work with the 4H Youth Volunteer Program and the Sesser Little League; and

WHEREAS, While Matthew Thery remains busy with his extra-curricular activities, he has also been able to achieve high academic success; he was placed on the honor roll at his high school and tied for valedictorian in his class with a 4.0 GPA; and

WHEREAS, Matthew Thery has been interested in politics from a young age and enjoys debates; he plans to serve in the U.S.Air Force after completing the Air Force Reserve Officer Training Corps program in college; he hopes to remain involved in state and local politics in the future; therefore, be it

RESOLVED, BY THE HOUSE OF REPRESENTATIVES OF THE ONE HUNDRED FIRST GENERAL ASSEMBLY OF THE STATE OF ILLINOIS, that we congratulate Matthew Eugene Thery on being elected as Illinois’ 70th Youth Governor and hope that his success will encourage all students to dream big and find an interest in state government;

and be it further RESOLVED, That a suitable copy of this resolution be presented to Matthew Thery as a symbol of our respect and esteem.