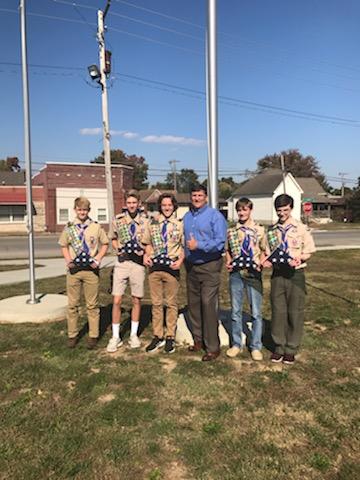 Before I get to this week’s comprehensive preview of the upcoming Veto Session, I want to share some GREAT news with you. The IL Department of Transportation has released its multi-year plan detailing upcoming road and bridge construction projects.

In 2016, Illinoisans voted overwhelmingly in favor of a ballot initiative that created a transportation funding lockbox. The binding referendum ensures that tax money collected through motor fuel sales are deposited into a fund that cannot be used for anything but transportation infrastructure projects.

At the end of the spring 2019 Session, I voted in favor of a $45 billion capital infrastructure plan to rebuild Illinois’ crumbling infrastructure. Years of neglect has left Illinois’ highways and bridges in deteriorating condition.

The ‘horizontal’ capital plan that will bring more than $1 billion for road construction and thousands of jobs to southern Illinois.

The details released in the IDOT multi-year plan covers construction that is currently underway, and projects that will begin in the years 2021-2025. The 117th district alone will receive more than $750 million dollars for road and bridge repair. As your State Representative, I fought very hard to have the 117th district’s infrastructure needs included in the capital bill. I am happy to report that jobs and construction projects are coming to Southern Illinois in the very near future!

The Veto Session this year is scheduled to begin this coming Monday, October 28th. So far, Governor Pritzker has signed 591 bills and vetoed only 8.

Veto Session provides the legislature with the opportunity to override a Governor’s vetoes, or to accept changes made by the executive branch through a line-item veto process. However, there are some years when new legislation passes during the Veto Session. Read below for a quick look at what might be coming up.

Last week I updated you on a report issued earlier this month by Governor Pritzker’s pension consolidation task force that called for among other things, the consolidation of assets of ‘downstate’ police and fire pension systems.

Proponents of the idea say that combining the roughly 650 plans’ assets into one would yield greater returns and allow more of the plans to reach a better funding level. Opponents of the plan, especially in municipalities that have made all necessary payments and invested their local pension fund money wisely, say the plan is akin to a bailout for communities that did not invest wisely and/or skipped required payments to pay for other items in their local budget.

I did a lot of checking in with my local police and firefighters throughout the month. I have also spoken with members of the Governor’s team. My takeaway at this point is that there are no plans to put ‘firewall’ language into any eventual bill that might be run. That leaves open the possibility downstate police and fire pension funds could be swept to pay for new spending or to fund other budget obligations.

To me, having no protections against sweeping that money is a total non-starter. Legislation on this topic is yet to be filed, so there is still time for me and my colleagues to weigh in and demand protective language. As this issue continues to develop, I will keep you up to date with the latest news.

Legislation that would ban the sale of flavored nicotine products, HB 3883, had previously been assigned to be heard in the House Human Services Committee on Monday afternoon. As of this morning, the Committee hearing has been canceled and no notice of a rescheduled date has been given.

Any time Democrats are back in Springfield, law-abiding gun owners should be paying close attention. In the spring Session, House Democrats advanced SB 1966, legislation that drastically increases the cost and changes requirements to obtain a firearm owner’s identification card (FOID).

The legislation has been held in the Senate Assignments committee for months. Let’s hope it stays there.

Another Busy Week in the 117th District

I had the pleasure of touring Railco of Southern Illinois with Senator Fowler and Herrin Mayor Steve Frattini this week. Railco provides rail car repair service and employs 18 people. Railco’s goal is to employ 50 people by the end of the year and eventually 100 people. That means Railco is HIRING!

If you are interested in working hard and making a very good wage, you can apply at Railco’s office at 10088 Samuel Rd, Carterville, IL 62918.

I had the privilege of meeting 5 Eagle Scouts from Our Lady of Mt. Carmel’s Regional Catholic School this week. I presented the Eagle Scouts with flags that have flown over the Illinois capitol. Thank you to these fine young men for serving their communities and working to better themselves. I am honored to know you all.

Thank you to the Carterville Rotary for hosting me at Carterville high school for a special event this week. Students at Carterville High School have formed their own Rotary Club and the club has grown to more than 100 members. Thank you to these fine service organizations for your dedication to making Southern Illinois a better place!

Thank you to my Southern Illinois Tourism Advisory Committee for a very informative and productive meeting at my office this week. This week we discussed tourism opportunities and the recent action regarding Walker’s Bluff. The Resort at Walker’s Bluff will be a tourist destination for families, businesses, and folks looking for entertainment.

Ms. JoAnn Holcomb was THRILLED to receive an official House of Representatives Certificate in honor of her 90th birthday. JoAnn was a hoot and she was so gracious. Happy Birthday JoAnn! Also, thank you to the fine professionals that provide a great quality of life for seniors living at The Landings in Carbondale!

Thank you to NovaCare of West Frankfort for the important respiratory therapy they do. I stopped by their open house this past Thursday for a tour and a meet and greet with their tremendous, friendly, and professional staff.

I stopped by the Centerstone board meeting this week to recognize a fantastic staff member that has retired recently. Elena Voigt has retired after 24 years of dedicated service. Centerstone cares for more than 16,000 people a year throughout seven locations in the Alton, Carbondale, Marion and West Frankfort areas. Centerstone offers skilled counseling, psychiatric and medical services, substance abuse treatment, and services for adults with developmental disabilities.