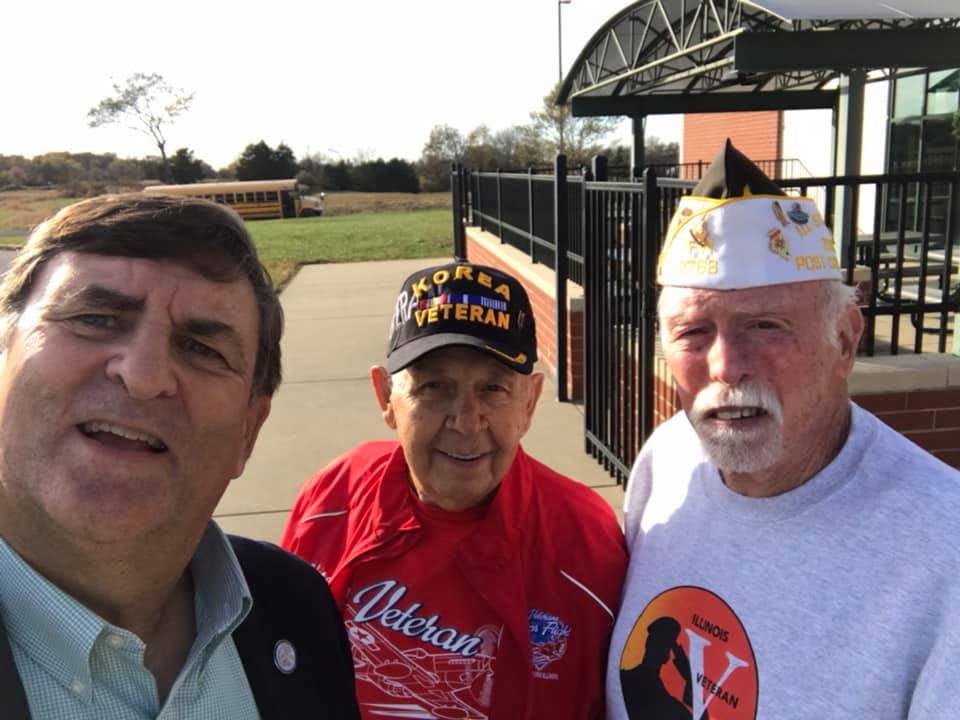 Today I had the privilege of attending a wonderful celebration honoring our veterans as the amazing veterans memorial was unveiled in Coello.

I was privileged to join our Senator Dale Fowler along with Mayor Curtis Overton and all who had a part in the program today. You have two opportunities to enjoy this amazing area in Coello.

1. Stop by and visit the area to reflect upon our country and those who have and do serve to keep America safe.

2. You may purchase a brick in honor and memorial of a loved one that served our country. If you are interested, please contact Coello city hall at (618) 724-7860

After the celebration it was chicken and dumplings of course across the street at the village hall as it is the 2nd Sunday of the month. All veterans were also provided with a complimentary meal.

Another honor this week was being invited to participate in the veteran’s celebration at Adams School in Creal Springs.

Thank you for the opportunity to share the infamous Flag story of 9-11 2001 and to honor our veterans. The children of Adams school did a wonderful job today presenting the program. Thank you Tyler Henry for the tour of the school.

Shout out to the clarinet duo, playing of the National Anthem and the conclusion with the playing of taps by the young trumpet player.
Not only is this school a very impressive facility, the staff and students are doing great things at Adams!

A summer of discontent has given way to a tumultuous autumn marked by suspicion and, in some cases, surrender for Chicago Democrat politicians in the wake of a sweeping federal corruption investigation into misconduct and self-dealing.

Various news reports over the past year have provided stunning details of raids by the FBI and IRS and revealed disturbing allegations that point to a culture of corruption among the powerful lobbyists and elected officials directly involved with the passage of capital infrastructure and gambling expansion plans.

To date, Senator Tom Cullerton has been indicted for defrauding the Teamsters union, former Senate Transportation Committee Chair and still State Senator Martin Sandoval and several of his associates’ homes and offices have been raided, and Representative Luis Arroyo has been arrested and charged with attempted bribery.

On the first day of the fall 2019 Veto Session, House Republicans held a Capitol press conference to announce the introduction of HJR 87, a Resolution that seeks to establish a State Ethics Task Force. At the same time, news was breaking that State Representative Luis Arroyo was arrested on the previous Friday on charges of bribing a sitting State Senator to take official action to legalize sweepstakes style gambling machines.

By the end of the three-day Session, House Speaker Mike Madigan and Republican Leader Jim Durkin had assigned members to the Committee and scheduled a meeting for Friday, Nov. 1. Rep. Arroyo chose to resign his seat before the Committee could meet.

While the FBI and IRS are hard at work investigating and stamping out corruption, and as more news on the subject of corruption is likely to break in the coming weeks and months, we as legislators have an urgent responsibility to reform Illinois’ lax ethics laws to help restore public trust in the General Assembly.

To that end, in addition to our sponsorship of the State Ethics Task Force Resolution (HJR 87), we have also signed on as co-sponsors to a new, tougher package of ethics bills. House Republican leader Jim Durkin presided over a press conference this week in Chicago to announce the introduction of new bills aimed at tackling corruption and cleaning up Illinois’ ethics laws.

The goal of the package is to bring Illinois in line with the best practices followed in other States and stop further erosion of public trust in State government. HB 3954 would require changes to statements of economic interests to include more details and make disclosure requirements more like what judges must disclose.

House Joint Resolution Constitutional Amendment 36 would require a special election to fill General Assembly seat vacancies through the same laws that govern party primaries. This will prevent political power brokers from handpicking replacement candidates in a smoke-filled backroom and give the people a voice in who represents them.

HR 588 would allow any chief sponsor of any bill with five or more co-sponsors from each party to call the bill for an up or down vote in a standing Committee. Long-time House Speaker Mike Madigan currently owns a one-man stranglehold on the legislative process in Springfield. If he doesn’t want it, it doesn’t pass. HR 588 would significantly change that dynamic.

HB 3948 would ban members of the General Assembly, their spouse, and their immediate live-in relatives from lobbying local government units. Rep. Luis Arroyo just happened to be a paid lobbyist for a company that wants sweepstakes-style gambling machines legalized in Illinois. He was arrested for allegedly bribing a Senator with money from the company he worked for to take official action in the Senate to pass the bill. We are all thankful that he was caught before the scheme could unfold.

HB 361 would enhance criminal and financial penalties for elected officials that break ethics laws. The fine in some cases could be as high as $1 million for certain offenses.

Another bill we feel is very important to stop corruption in the long-term would be the “revolving-door” ban for legislators that wish to become lobbyists. HB 165 would prevent a member of the General Assembly from becoming a lobbyist or engaging in lobbying efforts in Springfield for a period of two years after leaving office. This is a common-sense measure that has been stuck in Speaker Madigan’s House Rules Committee since its introduction in January 2019.

Elected officials can file and co-sponsor bills all day long, but the only way that we will get these important changes made is to get Governor Pritzker, Speaker Mike Madigan, and Senate President John Cullerton to move on them. Governor Pritzker should answer our calls to help us clean up Springfield and put his support behind these important changes.

Action will require political will on the part of some deeply entrenched Chicago politicians to get these bills over the finish line. But, no matter the lift, no matter the ask, these ethics bills must become law if Illinois is to restore any hope that ‘business as usual’ will be relegated to the ash heap of Illinois’ long history of public corruption.

Your Southern Illinois legislative delegation to Springfield has shown our cards. We have made our stand on your behalf. We are fully on board with cleaning up State government and rooting out corruption. We urge our Democrat colleagues and their party’s powerful political leaders to join us. The fall 2019 Veto Session resumes on Tuesday, and the time to act to strengthen our ethics laws is now.

On Tuesday lawmakers will head back to Springfield for the final week of the fall 2019 Veto Session. There is the potential for legislative action on the Governor’s proposed pension asset consolidation plan. I wrote about this idea in last week’s edition of Severin Says.

Other items that may be voted on include any of a variety of bills to ban vaping and flavored tobacco products, a bill that would cap the price of insulin, legislation to allow student-athletes to hire an agent and profit from the use of their likeness, a possible bill to clean up language in the recently passed legalized cannabis bill, and legislation regarding the city of Chicago’s efforts to build a casino.

As events unfold, I’ll keep you up to date. Thank you for continuing to reach out to me to express your opinion on the issues that matter most to you.