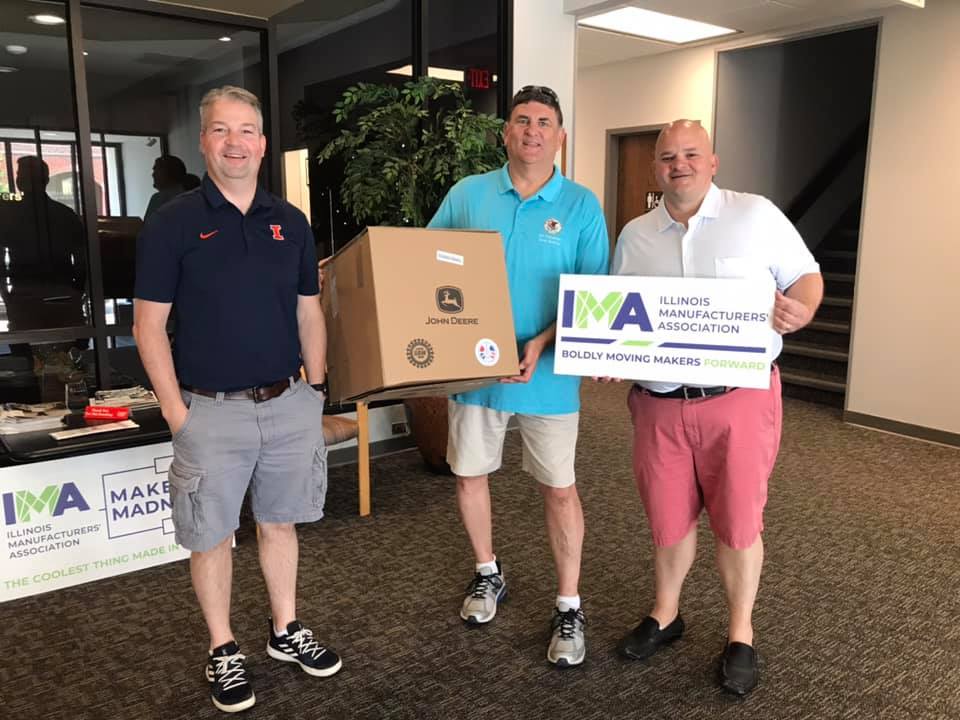 This week’s edition of Severin Says takes a look at two big issues that made news last week. I have updates from the Illinois State Board of Education and the Illinois Department of Public Health regarding summer school and resuming in-person learning in public schools. I also provide an in-depth look at the State of Illinois’ current financial picture.

Also, to all Southern Illinoisans that are working to serve others during these trying and uncertain times, I want to simply say THANK YOU and carry on!

In conjunction with the Illinois Department of Public Health (IDPH), the Illinois State Board of Education (ISBE) has released new guidance focusing on activities allowed in Phase 3 of the Restore Illinois plan, including summer school.

ISBE says the guidance is a result of collaborative efforts between educators, superintendents, social workers, nurses, and other stakeholders.

See below for a small sampling of information released by IDPH and ISBE this week. You can view the entire 29-page guidance booklet by clicking this link https://www.isbe.net/Documents/IDPH-ISBE-Summer-Programs-Guidance.pdf.

“All public and private schools must follow IDPH requirements in Phase 3, which:

Decisions regarding whether to conduct allowable activities during Phase 3 will remain at the discretion of local school authorities, in consultation with local public health departments. Schools should ensure individuals wear face coverings and other PPE appropriate to their duties and risk of exposure, wash hands frequently, conduct symptom and temperature checks before entering the school building, regularly clean and sanitize buildings and equipment, restrict the borrowing or sharing of items, and limit capacity in any space to 10 or fewer people. Individuals who show any signs or symptoms of illness should stay home.

The guidance outlines what to do if someone appears ill at school and further considerations for specific areas of the school, such as restrooms, classrooms, water fountains, playgrounds, hallways, administrative offices, and cafeterias. The guidance also contains considerations for specific activities, such as physical education, behind-the-wheel driver’s education, transportation, and music courses. Schools should clearly communicate safety protocols and expectations to students, staff, and families in advance — in the family’s native language — and via multiple modes, including signage around the school.

Activities allowed in Phase 3 include:

You can read the entire press release from ISBE by clicking here.

As you may remember, I voted NO on the majority party’s partisan, unbalanced FY 21 State budget.

I argued that Illinois was in no position to increase spending, but that’s exactly what House and Senate Democrats did. I argued that Illinois should not balance its budget on the hopes of borrowing billions from a Federal government program that doesn’t even exist yet, but that is the path that House and Senate Democrats chose. I also argued that the proposed budget (now law) gives too much power to Governor Pritzker at a time where I am seriously questioning some of the decisions he has made.

This week, the Commission on Government Forecasting and Accountability (CGFA) issued its monthly report this week covering State revenues, including general revenues, for May 2020.

The report reflects many effects from another full-month-long shutdown of Illinois economic activities.  The COVID-19 pandemic has had a serious effect upon the State of Illinois’ tax receipts and budget picture, and analysts from CGFA are advising the General Assembly on how these effects will continue to operate with respect to state spending and taxes.

In particular, sales tax receipts from levies on retail transactions were hit hard by the stay-at-home order.  Receipts from sales taxes dropped $182 million in May 2020 as opposed to May 2019, a decline of almost 25% in this key revenue stream.  While Illinois continued to collect sales taxes from “essential” brick-and-mortar retailers and from many Internet retailers, this could not make up for the lost revenue.  Many of the “essential” goods that Illinoisans continued to buy in May 2020 were groceries and pharmaceuticals, many of which are not taxed at the State level.  At grocery stores, Illinois charges the full sales tax rate on sweet goods such as soft drinks and candy, and local governments charge a tiny sales tax on other foodstuffs.

The serious decline in May 2020 tax revenues indicates that Illinois will close fiscal year 2020 (ends June 30, 2020) in a position of serious deficit.  This will, in turn, force the State to either cut its expenditures significantly or borrow a significant sum to make up the deficit, or both.  One reason for the Illinois House Republicans’ unanimous decision not to support the majority party’s budget and spending proposals in the May 2020 special session was the existence of unanswered questions concerning both possible budget strategies.

The $1.2 billion federal debt note is not scheduled to be the end of the debt cycle to be owed by Illinois.  Democrats enacted legislation in the May 2020 special session, SB 2099, that authorizes the State to borrow up to $5.0 billion from the Federal Reserve.  Existing Illinois law had not authorized the Governor to borrow emergency money from the federal government.  The changes enacted in May 2020 enabled the recently announced $1.2 billion in emergency short-term borrowing through the Federal Reserve.  It also authorized up to $5 billion in future borrowing through the newly created federal Municipal Liquidity Facility.  Illinois House Republicans unanimously voted against this legislation because it did not contain any sort of plan for paying back the borrowed money.  In addition, the borrowed money would fund a budget that had not been the subject of legislative discussion or debate and which contained no input from the House Republican Caucus, and would arguably constitute a violation of the State’s constitutional balanced-budget requirement.

As borrowers of the debt, the GOMB agreed with observers of the U.S. debt market that the $1.2 billion debt announcement on June 3 was a response to the higher yields demanded by private-sector lenders to the State.  These higher yields could be attributed to the State of Illinois’ overall deteriorating financial picture and its precarious budget.  The State of Illinois could have tried to sell $1.2 billion in short-term debt in the global debt marketplace, but the interest rates demanded by financiers willing to lend to Illinois are now so high that this was not seen as an optimal move to make.  In its most recent private-sector bond sale, Illinois was forced to offer interest rates of more than 4.8% – well more than 300 basis points higher than the interest rates paid by high-quality triple-A (AAA) debtors.

The U.S. Federal Reserve lending was made available in spring 2020 through the enactment by Congress of legislation creating the Municipal Liquidity Facility (MLF), an emergency COVID-19-related lending window designed for U.S. state and local governments.  $500 billion in total loan capital has been allocated to the Federal Reserve to lend through the MLF window.

In its review, Standard & Poor’s stated that the State of Illinois’ pro forma FY21 “balanced budget” depends on up to $5 billion in borrowing from the federal government.  The fiscal monitor labeled this dependence as an additional risk factor facing the State and its taxpayers.  In particular, S & P pointed to a feature of SB 2099, the majority party’s FY21 borrowing-authorization bill, which authorizes the Governor to borrow money from the U.S. Federal Reserve’s Municipal Liquidity Facility lending window for a period of up to 10 years.  This 10-year Illinois-federal debt was authorized in SB 2099 even though the Municipal Liquidity Facility was created and authorized by federal law with a time limit of no more than 36 months.  The conclusion of S & P’s analysts was that the State of Illinois’ ability to implement its current borrowing plan is a “precarious assumption.”

A Big Thank You goes out to the Illinois Manufacturer’s Association, John Deere, and the United Auto Workers Union for donating over 1200 face shields for Representative Bryant, Representative Windhorst and myself to distribute throughout our districts. THANK YOU!

Thanks to the Marion Ministerial Alliance food kitchen for allowing me to volunteer preparing and serving lunch last week.

I also presented the Alliance with a check from the Illinois Pork Producers Association. What a great community program that is supported by many local churches and individuals! Southern Illinois is a place where we serve one another!