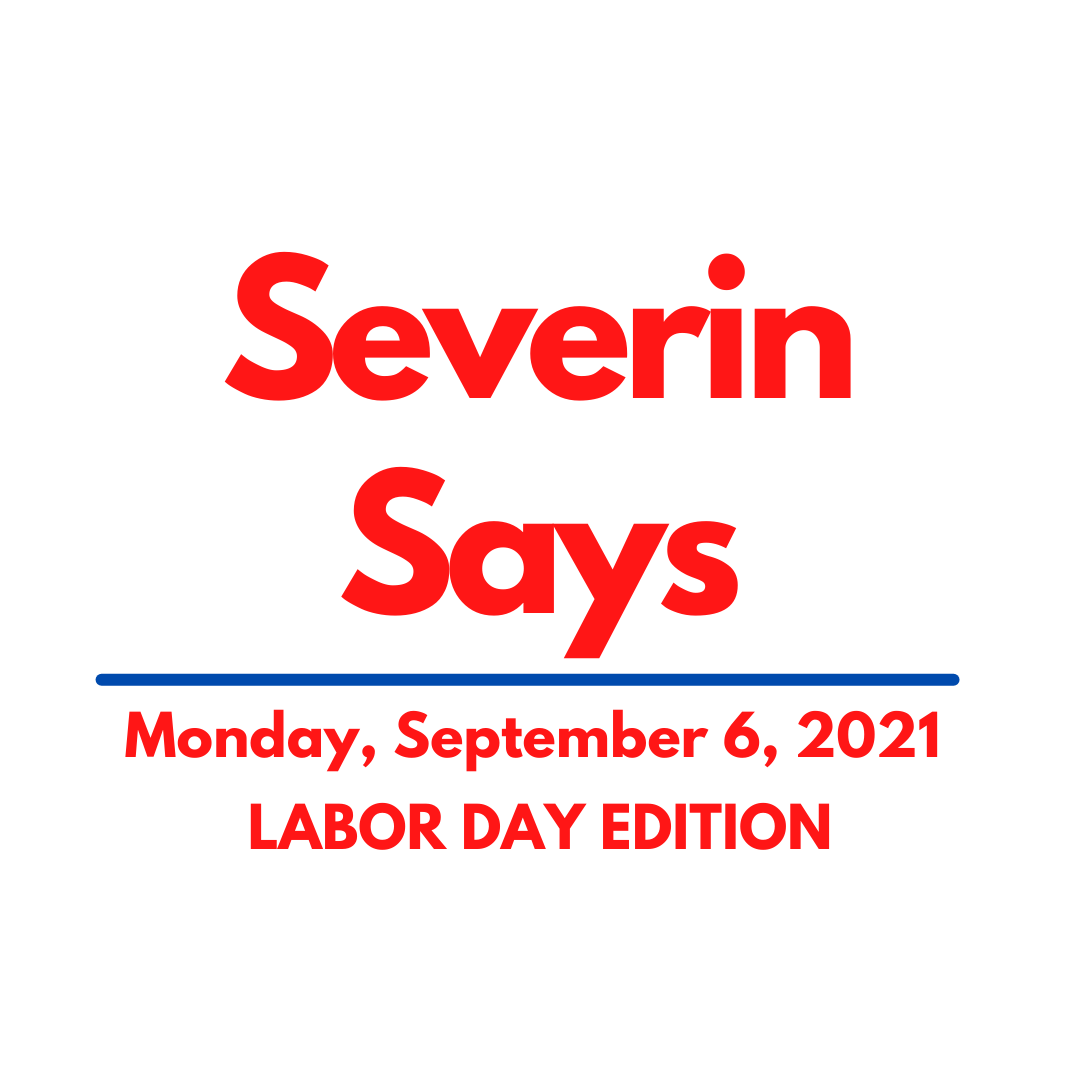 On the first Monday of September, we celebrate the contributions and success of the hard working American men and women that built this country! We stand on the shoulders of folks that endured deplorable conditions and fought to secure the rights and liberties of American workers to bargain collectively and demand reasonable and safe working conditions. I hope, on this Labor Day 2021, that you have taken a moment to reflect on these priceless contributions and to enjoy time with your friends and family doing what you love!

Last week, the House and Senate returned to Springfield for a one-day marathon Special Session to consider two issues. First, House and Senate Democrats muscled through legislation that, if signed by the Governor, would establish new district boundaries that would take effect in January 2023.

Also, I joined with my fellow House and Senate Southern Illinois Republican legislators in postponing two planned senior citizens health and wellness fairs scheduled for later this month. I’ve got information on that and much more in this week’s Labor Day 2021 edition of Severin Says!

It was my solemn honor to join with my House and Senate colleagues today in the Capitol rotunda to honor the service and sacrifice of the 13 brave members of the United States military that lost their lives in a terrorist attack in Afghanistan last week.

May the sacrifice and service of these heroic American soldiers never be forgotten. May God bless and comfort their families and loved ones and, may God continue to bless the citizens of our great nation through these difficult and trying times.

Following the release of the 2020 Census numbers in early August, the Illinois General Assembly met in special session on Tuesday, August 31 to vote on revised legislative redistricting maps.

What we have witnessed over the past week has been the continuation of a grand farce that began in the spring, when a partisan map-making process played out in a backroom behind a locked door using inaccurate and incomplete data that produced flawed maps drawn by politicians.

House Republicans warned that those maps would be inaccurate and unlawful – and that warning was proven true when official decennial census counts were released earlier last month. These official counts proved the Democrats’ maps violates the U.S. Constitution, federal law, and comparable provisions of the Illinois Constitution.

No lawful redistricting plan was effective on June 30, 2021 and in this situation. Illinois’ Constitution is clear – the bipartisan commission is responsible for drawing the maps. Instead of shifting responsibility to that bipartisan commission, Democrats fell back on the same disingenuous process that produced these flawed maps that needed to be re-done this week.

Over the last week, we saw Democrats hold hastily called redistricting hearings – some of which were thrown together so quickly that witnesses didn’t attend because they didn’t have time to prepare. Many community groups lack the resources to quickly analyze such a large amount of data, and they couldn’t possibly have been prepared to offer testimony. Not only that, but these hearings were held without actual maps for community groups to even comment on.

These hearings were a sham – a disingenuous effort that was intended to merely check a box, not to collect any real input from community groups. The legislators chairing these committees, the people we are supposed to entrust this process to, still couldn’t even say who is actually drawing the maps during these hearings.

The Democrats once again dropped two new versions of legislative maps in less than 24 hours, giving advocacy groupsalmost no time to review or give feedback. The final map was dropped just a few hours before the House voted on it.

We know that while these groups were testifying in front of the redistricting committees, the Democrats were once again drawing the new maps behind closed doors taking in no input from anyone other than fellow legislators.

This is not a genuine process. It’s a cynical power grab that has systematically ignored and discouraged input from the public and community groups to push through another map that violates the public’s trust.

This partisan process in which politicians draw maps will not result in the fair maps our state so desperately needs. Politicians should not be drawing maps. Period.

The Democrats’ new legislative map was introduced on Tuesday, August 31, as Floor Amendment #2 (Hernandez) to SB 927. On the same day, the House Democrats’ supermajority approved the new map by a vote of 73-43-0. Passage of the new map by partisan votes in both houses cleared the way for Governor Pritzker to sign the new map into law. This is expected to be followed by a new round of redistricting litigation.

“Today’s vote confirms that the Illinois Democrats have no interest in honest government. Contrary to their campaign promises, the House Democrats passed a legislative map that lacks any transparency or public input. After lying to taxpayers once, the Governor now has the opportunity to live up to his campaign promises and veto this politician-drawn map.”

At an unrelated news conference on Thursday, Governor Pritzker said he hasn’t yet reviewed the details of the maps, and they haven’t yet been sent to him.

Pritzker said his principles around maps are focused on “diversity of representation for the diverse state we have.”

In June, the governor signed the initial maps into law three days after saying he still had not had a chance to review them.

In January 2021, facing a federal bribery and corruption investigation, longtime Illinois House Speaker Michael J. Madigan abruptly stepped down from the speakership. Soon afterward, as questions continued to swirl about his actions and leadership, he left the Illinois House and relinquished his position as head of the Illinois Democratic Party.

Madigan’s departure created what briefly seemed like an opportunity for comprehensive ethics reform to end the culture of corruption in Illinois politics. However, this pathway closed quickly. Facing substantial pressure from advocates, the press, and ordinary citizens in favor of comprehensive ethics reform, Madigan’s successors chose to draft “ethics reform” legislation that made minor changes to the way the General Assembly operates and disciplines its members and top staff. The Democrats’ paltry “ethics reforms” were contained in SB 539, which was approved at the end of the spring session.

Soon after it passed, Legislative Inspector General Carol Pope announced that she would resign, effective Dec. 15, calling the job a “paper tiger” and saying it showed that “true ethics reform is not a priority” for the General Assembly. She specifically alleged the provision limiting her ability to investigate non-governmental ethics violations, and the fact that a complaint would be required for an investigation, tied her hands.

Following that announcement, some legislative Republicans called on Pritzker to use his amendatory veto power to send the bill back for revisions, “striking the provisions that would disempower the legislative inspector general.”

Specifically, he pointed to a change made in the bill that says the executive inspector general may receive and investigate complaints of wrongful behavior “without advance approval of the executive ethics commission.”

“Choosing to vote to uphold this weak amendatory veto is doubling down on the fact that the ethics reform that you passed takes away the ability to have a true and independent watchdog over this body,” Bourne, who initially voted for the bill, said in floor debate. “Choosing to side with this weak amendatory veto is choosing to side to give cover to politicians, rather than having an opportunity for the public to have faith in our government.”

House Republicans were united in our opposition to the Governor’s weak amendatory veto, and House Democrats were unable to muster the votes to accept the amendatory veto after many of their members had left for the night, resulting in an impasse. SB 539 was held up on the House floor, with no final action on ethics reform taking place during the August 31 session.

Environmentalist advocates and Governor JB Pritzker are working together to shut down coal fired power plants and natural gas power plants within the next 20 years. House and Senate Democrats are working with environmentalists and labor union groups in an attempt to appease Governor Pritzker’s desire to completely eliminate the use of fossil fuels for energy production while at the same time trying to save jobs that would be lost by the power plant closures.

This is a difficult needle for the Democrats to thread, as the reality of what happens when arbitrary dates for closing power plants would mean thousands of good paying union jobs lost in Illinois. Now that the Governor is on board with a legislative vehicle that seemingly meets his demands the likelihood of the General Assembly returning to Springfield before Veto Session scheduled for October has increased significantly. Nothing is certain in Illinois politics – stay tuned for updates!

“Out of an abundance of caution and care for the health and well-being of our constituents throughout Southern Illinois, we have made the decision to postpone upcoming senior citizens health fairs scheduled in Marion and Carbondale later this month. We regret that we must take this step, but our number one priority must be ensuring the health and safety of the hundreds of senior citizens and dozens of healthcare and senior services providers that would be in attendance at these events.”

State Senator Dale Fowler and State Rep. Dave Severin’s senior citizen health and wellness fair scheduled for Tuesday, September 14, 2021 at The Hub in Marion has been postponed until a date still to be determined.

Senator Fowler and Senator Bryant and Rep. Patrick Windhorst and Rep. Paul Jacobs’ citizens health and wellness fair scheduled for Wednesday, September 15, 2021 at the Carbondale Civic Center has also been postponed until a date still to be determined.

My office in Marion is available to serve you by appointment or phone Monday through Friday 8:30 AM – 4:30 PM. You may reach my office any time at 618-440-5090 or by visiting RepSeverin.com/contact and sending me a message. You can correspond by mail with my office at 600 Halfway Road, Marion, IL 62956.