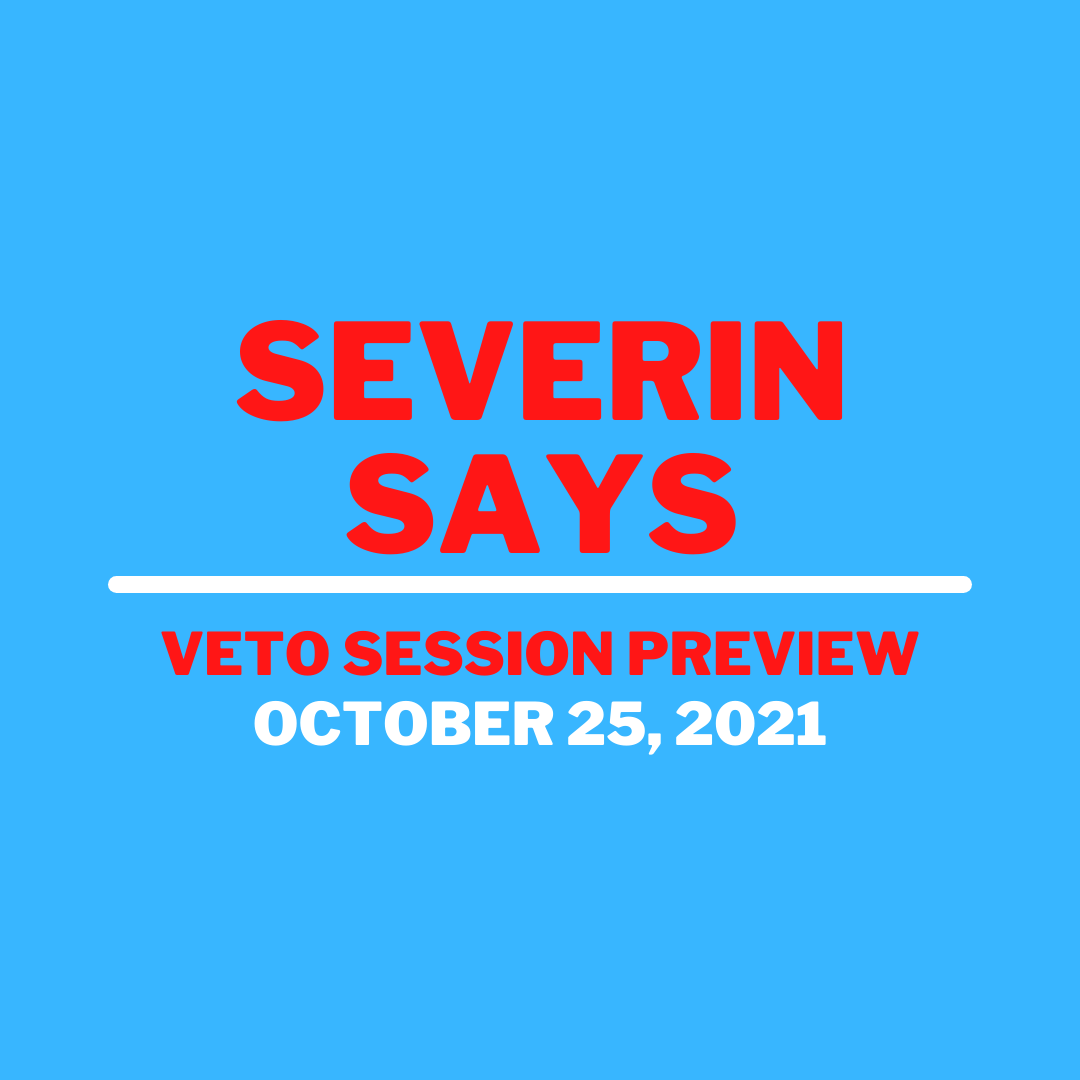 Last week’s scheduled three-day Veto Session turned in to a two-day Veto Session, as not much happened in the Illinois House. This week is expected to much busier, with several controversial items on the potential agenda. A change may be coming to the requirement that parents be notified prior to a minor child receiving an abortion. This is commonly referred to as the repeal of parental notification. Also, legislation has been filed to change the State’s Healthcare Right of Conscience Act to remove the ability for individuals to cite religious objections to COVID-19 vaccines or testing. New Congressional maps were revealed on Saturday. Hearings are scheduled for Tuesday in the House Redistricting Committee to review the new maps and take testimony from good government groups and individuals. I’ll keep you posted on all the breaking news. Please enjoy this week’s edition of Severin Says!

As I mentioned at the top, the first week of Veto Session was pretty much a waste of time in the Illinois House. The only vote taken in the House was on a House Resolution that changes the rules for remote voting. With such a long list of controversial floor votes potentially coming this week, Democrats changed the House Rules to allow legislators to vote remotely for the rest of this calendar year.

I believe legislators should be working in person at the Capitol to conduct business. We must be available and accountable. I voted NO. House Democrats approved the House Rules change and remote voting is allowed throughout the rest of 2021.

Repeal of Parental Notification prior to receiving Abortion, other Major Medical Services

Illinois Democrats may attempt to pass legislation this week to eliminate the requirement that health care providers notify the parents of minor children 48 hours prior to an abortion or other major medical procedure.

Current Illinois law requires parental notification prior to any major medical procedure, including abortion. Illinois already has some of the loosest restrictions of any state in the country for who can get an abortion, when someone can get an abortion and taxpayer funding of late-term abortions. If this legislation comes up for a vote, I will stand in strong opposition.

“Violations related to COVID-19 requirements. It is not a violation of this Act for any person or public official, or for any public or private association, agency, corporation, entity, institution, or employer, to take any measures or impose any requirements, including, but not limited to, any measures or requirements that involve provision of services by a physician or health care personnel, intended to prevent contraction or transmission of COVID-19 or any pathogens that result in COVID-19 or any of its subsequent iterations.

It is not a violation of this Act to enforce such measures or requirements, including by terminating employment or excluding individuals from a school, a place of employment, or public or private premises in response to noncompliance. This Section is a declaration of existing law and shall not be construed as a new enactment. Accordingly, this Section shall apply to all actions commenced or pending on or after the effective date of this amendatory Act of the 102nd General Assembly. Nothing in this Section is intended to affect any right or remedy under federal law.”

I believe free American citizens should have the right to object to medical services, injections, or tests based on sincerely held religious beliefs or objections. The legislature has so far not weighed in on changes to any laws governing the COVID-19 pandemic medical and public safety response. House Democrats seem to want to hand even more power over to Governor Pritzker. I’ll have more on this issue if and when a vote takes place in the House this week.

On Saturday, House and Senate Democrats released yet another new draft of Congressional district boundaries that would be potentially be in effect after the November 2022 elections when a new Congress is seated in January 2023. The newest version of proposed maps draw together four Republican incumbent members of Congress and would make an already geographically-massive new district in Southern Illinois even bigger. You can see the gerrymandering on full display in the picture below. You can check out the maps here:www.ilhousedems.com/redistricting

This map disenfranchises voters all throughout the State of Illinois. Politicians simply should not be drawing the maps. The issue of redistricting is too important and too central to the function of our system of government to allow politicians to pick their voters. An independent commission is needed. House and Senate Democrats are likely to bring the new maps up for a vote this week following scheduled House and Senate Redistricting Hearings on Tuesday.

My office in Marion is available to serve you by appointment or phone Monday through Friday 8:30 AM – 4:30 PM. You may reach my office any time at 618-440-5090 or by visiting RepSeverin.com/contact and sending me a message. You can correspond by mail with my office at 600 Halfway Road, Marion, IL