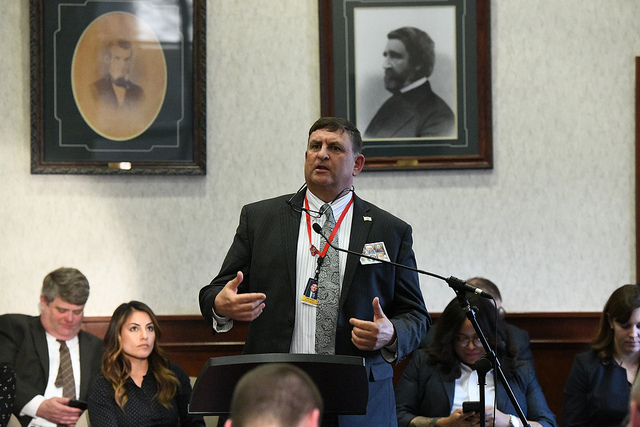 Dear Friend,
This week is known in Springfield as Committee Deadline week. As part of my ongoing effort to keep you informed as legislation moves, I want to invite you to visit the Illinois General Assembly’s website at www.ilga.gov to check on the status of legislation or to contact your legislators and legislative leaders. You can also visit my.ilga.gov to file witness slips in support or opposition to bills that matter to you.

At the bottom of this week’s Severin Says, I provide a bit of a civics lesson regarding how legislation will likely continue to proceed as the House continues its business.

Mount Vernon Town Hall Meeting Recap
In case you missed it, this past Monday I joined State Senator Paul Schimpf and State Representative Terri Bryant at Mount Vernon Township High School for a Town Hall meeting and legislative update. Thank you to the administration for their hospitality, and for allowing us to use the BEAUTIFUL Schweinfurth Theatre.

Around 80 residents were on hand from Mount Vernon and Jefferson County to have their voices heard. WSIL TV provided excellent coverage of the event.

You can watch the entire story by clicking here. Thanks to WSIL reporter Emily Manley for her work to cover the story and go in depth with audience members.

“Schools are just now starting to climb out of the financial damage that was done by the budget impasse,” Severin said. “This is a cost saving measure and a taxpayer friendly proposal. Why should a school be forced by law to provide their financial state of affairs in an ad in the newspaper when they could post the same information word for word on the internet and in public view in the schools? I’m a former school board member and president and I am very familiar with how tight budgets are both for local schools and for the State of Illinois.

In Springfield, this week is known as ‘Committee deadline’ week. Representatives have until Friday to move priority bills or substantial legislative measures on to the House floor for a vote. Having earned unanimous approval from the House Elementary and Secondary Education Committee (8-0), HB 2485 moves to the full House for consideration.

How Remaining House Bills Might Still Pass After Committee Deadline
Here’s a quick, two-paragraph tutorial on how you can keep track of legislation that’s still pending as the 101st General Assembly Session reaches the halfway point.

Bills that have been reported by a House committee to the House floor on 2nd Reading are ready for further discussion and debate.  “Second Reading” is the technical name for a bill that can be amended.  After a lead sponsor of a House bill believes that the bill has reached its final form and no longer needs to be amended, the member may grant permission to move the bill on the House floor from Second Reading to “Third Reading,” the final stage of the bill’s progress in the House.  A bill on Third Reading can be called for a final vote to determine whether or not it will be passed by the House. The status of each of the 3,824 bills in the House can be found on the legislation webpage within the overall General Assembly website.

Quickshots! In and Out of Springfield!