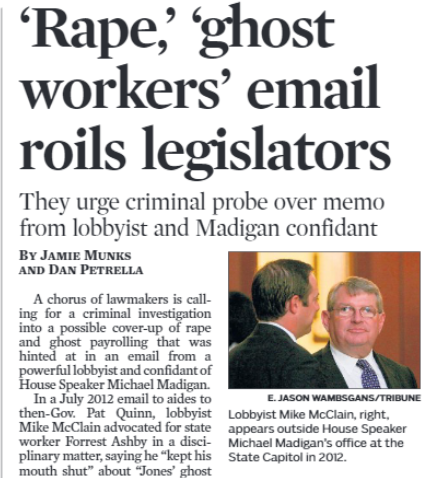 WBEZ out of Chicago used the Freedom of Information Act (FOIA) to dig into McClain’s communications with top members of the Pat Quinn administration.What we learned should shock the conscience of every single Illinois resident.

McClain is under federal investigation for multiple reasons. He has been Mike Madigan’s ‘fixer’ for decades. In the emails to Quinn’s chief of staff Jerry Stermer, McClain urged leniency for political worker Forrest Ashby, while disciplinary action was being considered by the Quinn Administration back in 2012.  Ashby was described in McClain’s email as “loyal to the administration” and was lauded by the lobbyist and insider for covering up the ghost worker scandal and a, “rape in Champaign.”

WBEZ has reported several times previously that McClain is an important focal point in the ongoing federal investigation into ComEd and the utility’s actions in Springfield. McClain is a former legislator and was one of Illinois’ most influential lobbyists, enjoying a decades-long friendship with and unrivaled access to Speaker Madigan. A federal search warrant issued in the ongoing federal investigation into ComEd sought records pertaining to Madigan. McClain’s home was raided by federal agents last May and the Chicago Tribune has reported that McClain’s telephone conversations were secretly monitored by federal investigators.

House Republican Leader Jim Durkin has led the Republicans’ calls for a criminal investigation and legislative hearings in response to the disclosure of the email from McClain hinting at a rape cover-up and ghost payrolling in state government. I agree that the proper authorities should begin an immediate investigation into both of these heinous crimes.

“This revelation is shocking and beyond words,” Durkin said in a statement this week. “I am disturbed by the fact that horrific and possible criminal actions may have occurred and government officials, Mike McClain and his enablers chose to remain silent instead of taking action.

“There needs to be an immediate criminal investigation into the content of McClain’s email to the administration, and I encourage anyone with information on this to report it immediately to the proper authorities.” (Source: House Republican Week in Review 1-10-2020)

Earlier this week, House Republican members held a press conference Wednesday to discuss the dismal failure of the General Assembly’s “Property Tax Relief Task Force”. The task force was formed in a trade off between Democrat lawmakers and Governor Pritzker and Speaker Madigan. In exchange for a YES vote on the progressive income tax ballot question, the State’s top Democrats allowed the General Assembly to form a task force with the often stated goal of reducing high property taxes in Illinois.

The task force was also supposed to come up with real reforms to provide relief to struggling homeowners. Instead, Democrats on the task force drafted a slapdash report that failed to include dozens of reform ideas offered by Republican members. A breakdown of the task force’s format and subsequent “meetings” will paint a clear picture as to why it failed.

First, the task force was made up of 88 members. House Republicans believe the task force was created in such a way to slow down any progress and stifle ideas from the minority Republicans. The commission’s chairman missed the statutory filing deadline for the first report and the most recently due report and then unilaterally submitted a self-drafted report without the consent or approval of the whole, supposedly, bipartisan task force.

Considering the entire task force had only met on a few occasions, all House Republicans on the task force rejected the flawed report after being refused an opportunity for thorough review and revisions holding to the bipartisan intent of the task force. This bungled process proves once again that Illinois Democrats are not serious about implementing substantive property tax reforms.

Out migration numbers released at the end of 2019 for the State of Illinois prove once again that high property taxes remain one of the most important issues facing Illinois. Our citizens and businesses are leaving in massive numbers for cheaper places to live and work. As we convene the spring session later this month, I stand ready to negotiate real property tax reforms and provide relief for Illinois families. Our future depends on it.

It was fantastic to join fellow community members in recognizing and honoring the Benton high school senior football players today at the Benton Lions club bi-weekly meeting at Franklin Hospital.

The kids did a great job of introducing themselves and their family ties. The players also shared their most memorable moment of the season and their post high school plans. I was amazed to learn how many are planning to join and continue their education in the armed forces. Benton proud!

The Office of the Illinois State Fire Marshal is now accepting applications for the competitive Small Equipment Grant program. The program allows fire departments, fire protection districts and township fire departments, as well as not-for-profit EMS providers to access up to $26,000 in grant funds for specific purposes as outlined in program documents.

Applications must be postmarked no later than February 29, 2020. A total of $3.5 million is available for this application cycle.

Marion….State Representative Dave Severin announced this week that he has been appointed to the Lyme Disease Task Force by House Republican Leader Jim Durkin. Rep. Severin co sponsored HB 889, now Public Act 101-0371 that requires an individual or group policy of accident and health insurance or managed care plan to provide coverage for long-term antibiotic therapy for a person with a tick-borne disease.

“Lyme disease is difficult to test for and diagnose and sometimes leads to complicated plans for treatment,” Severin said. “I am looking forward to studying this issue more closely and working to achieve positive results for individuals that contract lyme disease.”

Publc Act 101-606 charges the task force to study the use of prescription drugs and innovative therapies for children and adults with rare diseases, and make recommendations on legislation that could improve the care and  treatment of adults or children with rare diseases.

The Task Force is supposed to submit a report of its findings and recommendations to the General Assembly and the Governor by March 1, 2020.